We believe that the supply chain from manufacturers to Consumers could be shorter and even be directly, without valueless intermediary. We want to bring products from manufacturers directly to Big Wholesalers, Supermarket chains or even Directly to its targeted consumers. We want offer the most profit to supply chain and at the same time offering highest value possible to the end-users.

Therefore in 2011 VIEC was found to serve this idea. In 2017 we have accomplished to bring products directly from factory in the Netherlands to Vietnamese consumers via cross-border e-commerce in less than 10 days. Besides, many manufacturers have found their markets in Vietnam as well as in the Netherlands via VIEC.

Vietnamese market: The land of imported formula milk for babies and honey

Vietnam is now in the middle of a robust expansion of modern trade stores. In 2019, the Year-over-Year increase in the number of supermarkets and department stores was 16% and 23%. And while modern retail channels are mainly concentrated in major urban centers like Hanoi, Da Nang, and Ho Chi Minh City. Multiple network expansions have taken place in other provincial cities like Binh Duong and Vung Tau. With the emergence of the Vinmart or Bach Hoa Xanh chain, the number of convenience stores grew even faster. From 1,608 stores in 2018, it skyrocketed to about 4,000 in nearly two-and-a-half years.

Thanks to this, the country’s populous consumer body now benefits from greater access to a vast spectrum of products of every type. And not only are the consumers becoming the beneficiaries of this expansion, but consumer products like formula milk, both powder and ready-to-drink, are becoming increasingly widespread.

Vietnamese consumers, especially the younger generations, who have been riding on the globalisation wave, have strong exposure and recognition of foreign brands. This opens wide the opportunity for imported products to capture market share, taking advantage of the growing interest in foreign foods. Considered to be of better quality and hygiene standards, these brands are deemed more credible and provide more health benefits, and certain types of imported formula milk are now actively sought out.

Moreover, Vietnam’s continuous efforts to be more involved in the global supply chain have opened more gateway to foreign products in general. As of September 2020, the country has sealed 13 Free Trade Agreements with three ongoing agreements that will enable free trade access to 57 foreign markets. The free trade commitments of Vietnam under the 13 signed FTAs have widened access to foreign dairy products. Current import duties on formula milk products from countries participating in these 13 FTAs are mostly set between 0%-10%. Notably, two recently effective FTAs, CPTPP and EVFTA, will further promote dairy imports from Europe, the traditional dairy trading partners for Vietnam. According to the EVFTA, Vietnam will soon remove all tariffs on processed food from pre-EVFTA duties up to 40% (including infant foods) after a maximum of seven years. Currently, import tariffs for dairy products exported from the E.U. are from 6.5% for formula milk. The tariff is expected to be eliminated entirely in five years.

Current Trends in the Vietnamese market for formula milk: Potentials and challenges.

Advantages for foreign manufacturers of formula milk for babies

If they export their formula milk products into Vietnam right now, manufacturers will benefit from many current trends in the market. Ready-to-drink formula milk is increasingly viewed as a potential option for working mothers with more modern careers and busier lifestyles. Time efficiency and flexibility are exactly what a majority of young parents need for their lives in the hustle, making them the main drivers. Simultaneously, Vietnam boasts a rising domestic consumption of high-quality products. As the consumers are more aware of food safety, this scales up the needs and wants for imported F&B products like imported formula milk products, which are considered to be of higher quality and higher safety standards compared to local formula milk. 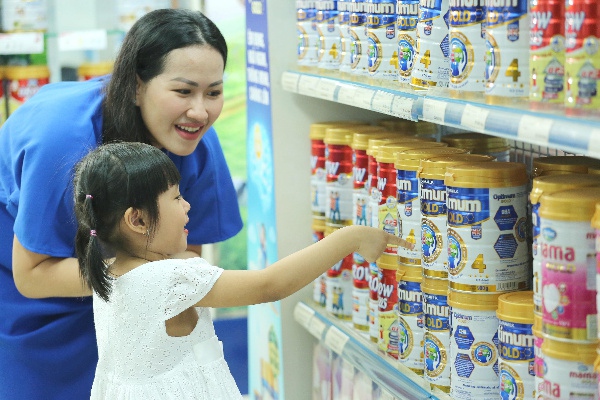 The drastic growth of E-commerce is also attracting more interest for formula milk. Consumers increasingly purchase from e-commerce sites due to limited offerings in traditional offline stores. With the expansion of online shopping platforms, foreign brands are finding it easier than ever to reach more of the local target audience. Although traditional markets still take up a substantial part of formula milk retail sales, its forecast revenue growth is expected to slow down in the coming years while modern channels like Lazada, Shopee thrive.

Inarguably, there will also be certain challenges that a formula milk brand has to overcome on their entry. Local and imported formula milk brands are working hard to improve their products’ quality and packaging. New entrants to imported formula milk will face higher competition in penetrating the market. A considerable budget to attempt for this potential market’s share is required in a playground of giants like Germany’s Nestle Nan, HiPP, Humana, France’s Gilbert Laboratories—Physiolac, France Lait, Dumex, Ireland’s Abbott Grow, Similac or the Netherland’s Similac Abbott, Frieslandcampina—Frisolac, Mead Johnson Enfamil, and Nestle Nan.

Moreover, despite the increasing exposure and acquisition of imported products, Vietnam is a middle-income country with a considerable gap between urban and rural consumers. As food expenditures are linked closely with household income, preference for imported foods is generally limited to a smaller population in major cities, who are relatively more affordable. Demand for imported goods is still low in rural areas, which constitute more than 63% of the whole population. Last but not least, more stringent regulations and requirements will likely hinder the market penetration of new imported formula milk. Strict regulations on food safety also challenge imported food products. Similar to the Netherlands, Vietnam also restricts advertisement on formula milk for infants. The restrictions on advertising have effectively slowed the growth of the formula milk market in Vietnam.

So how can you, a foreign manufacturer looking to enter the Vietnamese market, overcome these hurdles? We at VIEC have the answers ready for you.

Despite the challenges mentioned above, VIEC, with our expertise and understanding of the market, has successfully supported our several partners—manufacturers in bringing numerous Dutch formula milk products to Vietnam.
VIEC has conducted several market research since 2016 and identified the key to effectively approaching this potential market. So far, our team at VIEC has brought OLLA – formula milk for babies 0 – 2 years old to Vietnam. Moreover, we have brought leading Dutch retailers’ products like Etos, Kruidvat, Albert Heijn baby milk to Vietnam. Most remarkably, we have brought full cream milk powder directly from the Cremé de la cream factory to Vietnam (with less than just 10 days of door-to-door transportation) via our own e-commercial platform.

Despite its being laden with huge international brands, introducing our partners’ products into Vietnam’s formula milk market has seen particular successes with minimum marketing and promotion costs. Still, more potentials are there to realize. And now, VIEC is looking to build up further success and seeking more opportunities to cooperate with other factories and get your products to Vietnam.
Are you a small- or medium-sized formula milk manufacturer that is looking for an opportunity to make a name for yourself in a potential market like Vietnam? Then let VIEC help you in importing your formula milk products to Vietnam.
Anything is possible if you dare to “THINK BIGGER” with us.
See more of our projects here, or contact us for any inquiries.